Tigran: Armenia, by the Grace of God – extract from wonderful poignant video by Vincent Moon

On this new album, there is a sense of a legacy being treated with great respect and affection, as Tigran Hamasyan’s piano immerses itself inventively around the pieces sung by the atmospheric voices of the Yerevan State Chamber Choir. This interesting and often absorbing experiment was recorded in Yerevan in 2014, and produced by ECM founder Manfred Eicher. “It has been a challenge to explore the mystery of Armenian sacred music and to create polyphonic arrangements for melodies by tradition melodic,‘’ writes Hamasyan in the liner notes.

The title translates as ‘Light from Light’ and the matter in hand is Armenian sacred music, including hymns, chants, sharakans – Armenia’s liturgical songs – and Cantos from the 5th century to the 20th, arranged for piano and voices by Tigran Hamasya who works his piano around the inherited traditions. The composer sat down and composed at least one melody prior to the recording, but in the main the pieces were in fact wholly improvised, presumably on various takes.

In March of this year, Hamasyan and the Yerevan State Chamber Choir began an extensive tour of churches in Armenia, Georgia, Turkey, Lebanon, France, Belgium, Switzerland, Czech Republic, Britain, Germany, Luxembourg, Russia, the USA and this country. On Saturday October 17, you can catch the revered pianist and the equally celebrated choir at Christchurch in Dublin.

Moody, tremulous, limpid, occasionally forceful and rising to crescendo, the combined elements should provide an engrossing evening. But there will always be the disc and its mystical allure.

Those who remember Tigran Hamasyan’s bone-shaking, synth-squealing, pop-jazz gigs might have done a double-take as the young Armenian pianist gravely filed on to the Union Chapel’s stage accompanied only by a bowed, hooded, orange-robed choir. Some might wonder whether 2014’s swansong of ECM Records’s globally popular choral/jazz pairing of the Hilliard vocal ensemble with Jan Garbarek had anything to do with the young virtuoso’s arrival on the same label with a solemn programme of medieval and modern Armenian vocal music, embroidered only by his jazz-steeped piano playing. But Hamasyan is devoted to his homeland’s traditions, and this year’s 100th anniversary of the Armenian genocides by the Ottoman authorities gives this venture a timely poignancy.

He embraced the challenge in this performance with a typical combination of diligent study and brilliant aplomb with eight singers from the Yerevan State Choir.

The choir began a rhythmic, short-note pulse on the animated Ov Zarmanali, and whispered behind the leader’s now groove-like chord work. Hamasyan’s streaming ingenuity erupted in an outburst of sleek arpeggios and left-hand hooks that brought a roar from the crowd, but the shift never felt like a dislocation as the choir slithered back in around him. Hamasyan jangled a drone-like chord pattern as the lean, vibrato-free voices of his partners punched out exclamatory percussive motifs. A walking bassline underpinned the sound of the male members at their most guttural (while Hamasyan’s improv almost veered into My Favourite Things), and a stamping vocal dance preceded the solemn, carol-like rumination of the encore.

If last year’s departure of the Hilliard/Garbarek ensemble left a gap in contemporary music, this sounds like the dramatically distinctive replacement.

“Armenian sacred music from the 5th century to the 20th century” – that reads like the title of an academic monograph – the kind of thing you’d toil over in the drafty corner of a university library, watching the night draw in and your chances of making that early morning essay deadline evaporate. It may well be, but it’s also the unassuming tagline of Luys i Luso (ECM), the latest album by young Armenian pianist Tigran Hamasyan, which is anything but dry and dusty.

Hamasyan’s longstanding interest in the sacred music of his homeland has led him to collaborate with the Yerevan State Chamber Choir and to arrange a series of Armenian hymns, cantos and sharakans (chants) by composers such as Komitas, Mesrop Mashtots and Grigor Narekatsi, for piano and voices. It makes for a profoundly atmospheric recording, but performed by Hamasyan and a pared-down touring choir of eight voices beneath the cavernous domed ceiling of Union Chapel in Islington, the music sounded even better and more alive.

Dressed in flowing robes embroidered with crosses – like illustrations from the pages of an illuminated manuscript – the choir began by singing the softest of drones, weaving in unsettling quarter-tone dissonances. They sang dirges and tearful laments that spoke of dour monasticism in curious near-eastern modes. There were flowing, riverine melodies and pulsing vamps, wails that sounded like gusts of wind howling through darkened cloisters, and moments of beautiful serenity when the voices of the soloists broke free and drifted upwards like wisps of smoke. Occasionally a more modern, Western-sounding hymn arrived and when it did it was wonderfully affecting – like a long-awaited resolution.

His head buried in the keys, Hamasyan accompanied the vocalists with trembling chords, embellishing and commenting on the music with folky trills, ornaments and grooving vamps. His contributions were subtle at first, as they are on the album, but he moved steadily through the gears as the concert progressed. Cross rhythms became more outlandish and unpredictable; the lines grew longer, unfurling like spools of thread; and the grooves became more overtly modern, taking us into familiar Tigran territory.

The climax was an extended piano breakdown that eclipsed anything on the recording. Vocalising drum parts under his breath and hurling himself at the keys, Hamasyan played like a man possessed, as if swept away by religious fervour. Leaning back on the time he flirted with funk, hip-hop and ambient rock (influences that pervade his previous recordings like trio album Mockroot). Motifs spread like wildfire across the full range of the piano, there were syncopated riffs on top of syncopated riffs and the singers did well not to come unstuck, sticking to their parts with monastic stoicism.

As a standing ovation rippled through the pews, I glanced down at the programme notes where Hamasyan describes his fascination with Armenian sacred music as ‘living tradition’. It’s hard to imagine anyone making it sound fresher or more engaging than this.

Pianist- prodigy Hamasyan grew up in California, winning the famous Thelonious Monk prize and releasing his debut album while still a teenager. Now he’s returned to his birthplace of Armenia, from where he has made this extraordinarily beautiful recording of sacred music.

Arranged by Hamasyan, the pieces date back from the 5th to the 20th centuries and are sung by a 23-strong choir in an earthily passionate liturgical style. The role of the piano is vital: sometimes introducing a theme, sometimes improvising around it, Hamasyan uses the characteristic, Eastern-hued Armenian modes to summon up an ancient world. It’s very different to Jan Garbarek and the Hilliard Ensemble’s million-selling Officium, but if you like that, you’ll love this.

Tigran and his wonderful trio will grace the Siam Tent stage at WOMAD 2015 on July 25. He will be performing pieces from his latest Mockroot album as well as other older standards. This year the festival is being held outside of Malmesbury at Charlton Park. Tigran will go on late Saturday night (officialy Sunday morning) at 00:30. 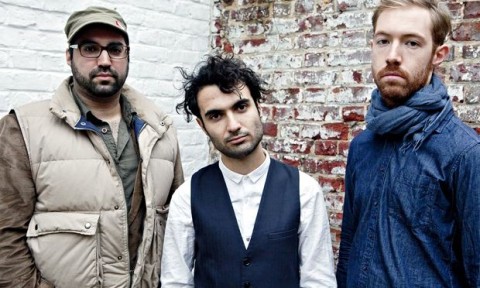 Tigran Hamasyan: Mockroot review – a vibrant, personal take on songs from Armenia and beyond