The spirit of Sona Jobarteh’s musical work stands on the mighty shoulders of The West African Griot Tradition; she is a living archive of the Gambian people. With one ear on the family’s historic reputation, one on the all-important future legacy and her heart in both places, she is preparing a place today for the next generation. Her singing and Kora playing while fronting her band, spring directly from this tradition. The extent of her recognition today is evidenced by more than 10 million watchers on YouTube and considerable numbers on other digital platforms. All this despite singing in her native languages and keeping to her own path within the music industry. 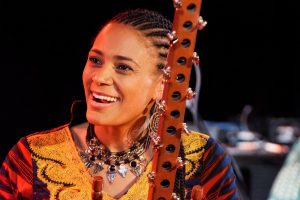 Sona Jobarteh’s Live performances and speaking engagements zoomed to 52 performances with 12 sell outs during 2019 – she completed 15 dates in USA from the Hollywood Bowl in LA to Symphony Space in NYC; she added WOMAD Australia and N Zealand, Macau China. Sona has increased her audiences in London to sell out 2 shows in Kings Place also in Cologne Philharmonie,  when playing Paris for the first time it sold out 8 weeks ahead of time. These band performances are under-pinned by her skills as a composer arising from early days at London’s RCM and Purcell School of Music. She scored the film Motherland in 2010 and 2019 saw the first performance on the South Bank in London of “Innovation through Preservation Episode 1”- a PRS commission which was lauded by The Observer as uniting West African sounds and Western Classical …”to exuberant and poetic effect.” Further Episodes are expected in 2021.

Sona’s dedication to spreading powerful humanitarian messages through her songs and her stage performances makes her much more than a musician; she is active in social change and leads by her own example. Sona singlehandedly set up The Gambia Academy, a pioneering institution dedicated to achieving educational reform across the continent of Africa. This Academy is the first of its kind to deliver a mainstream academic curriculum at a high level, whilst also bringing the culture, traditions and history that belong to its students, to the front and centre of their everyday education. These efforts have gained her invitations to deliver speeches at high profile events around the world – including summits for the UN, the World Trade Organization and UNICEF.

A West African historian, storyteller, praise singer, poet, or musician. The griot is a repository of oral tradition and is often seen as a leader due to his or her position as an advisor to royal personages. As a result of the former of these two functions, they are sometimes called a bard.

The Kora (a 21-stringed African harp) is one of the most important instruments of the Manding peoples and it belongs exclusively to the few “Griot” families within the Manding of West Africa and only those who are born into one of these families have the right to play the instrument professionally. The Jobarteh family is one of the ﬁve dynasties that holds this right. Sona’s lineage carries a formidable reputation for renowned Kora masters and most notable amongst these are her grandfather, Amadu Bansang Jobarteh – an icon in Gambia’s cultural and musical history – and her cousin, the legendary, Toumani Diabaté. Sona is the ﬁrst professional female Kora virtuoso to come from any of the West African Griot dynasties. Breaking with convention, she is a pioneer in an ancient, male-dominated hereditary tradition that has been exclusively handed down from father to son for the past seven centuries

Fasiya (“Heritage”) was released in 2011 and started her reputation as an instrumentalist on Kora and Acoustic Guitar, with a distinctive voice, singing and playing infectious melodies with a graceful onstage presence -this helped Sona to rapidly achieve international success as a performer. Her and her music seem to have the ability to touch audiences from all backgrounds and cultures, commanding the attention of Germany’s president, Britain’s Prince Charles and concert goers alike. Her captivating stage show has proved to be popular, and with a repertoire that exudes accessible sophistication, her audience demographic is expanding. She is a trained composer who majored in composition and scoring during her time at the Purcell School of Music in her earlier years, allowing her to land her ﬁrst ﬁlm commission scoring for the movie, Motherland. Here, she cultivated a fresh sonic in African, cinematic music. The ﬁlm went on to collect multiple awards around the world. More recently, she was commissioned by PRS to compose a piece for Western and African instruments, exploring the meeting points between these two worlds through a dynamic, musical journey. In 2019, the composition was premiered at London’s South Bank. Sona is also a unique academic within the ﬁeld of Mande music, history and social anthropology. She has lectured and held residencies at universities and colleges in Africa, across the United States and Europe.

According to Sona, Africa faces the crucial and urgent challenge of addressing its education systems. Children who are fortunate enough to be able to attend school spend most of their waking hours in school, however in most cases the environment, culture, approach and curricula content within these schools are invariably oriented around a post-colonial value system and subsequently a foreign perspective. 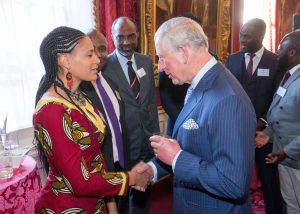 For Sona, it is detrimental for future generations of the continent whose values and concepts are shaped during their school years, to continue to be trained within a system where African culture, African history, African traditions and their intrinsic values are either non-existent or at best, relegated to the position of extra-curricular exoticism. Her Academy is therefore the first of its kind to deliver a mainstream academic curriculum at a high level, whilst also bringing the culture, traditions and history that belong to students, to the front and centre of their everyday education. Her achievements in developing a new curriculum that reflects this reform at her Academy has gained her invitations to deliver speeches at high profile events around the world – including summits for the UN, the World Trade Organization and UNICEF. 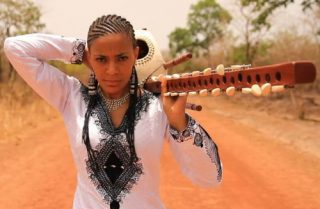